You are here: Home / Best Routes

New York City is a decidedly pedestrian and cyclist-friendly city, and there are many bike paths that will take you on a long meander past some of the best sights and sounds the city has to offer. The five boroughs each offer their own flavor, so it pays to ride through each one to enjoy the full experience. The five best bike rides in NYC offer all the best of the city and more. 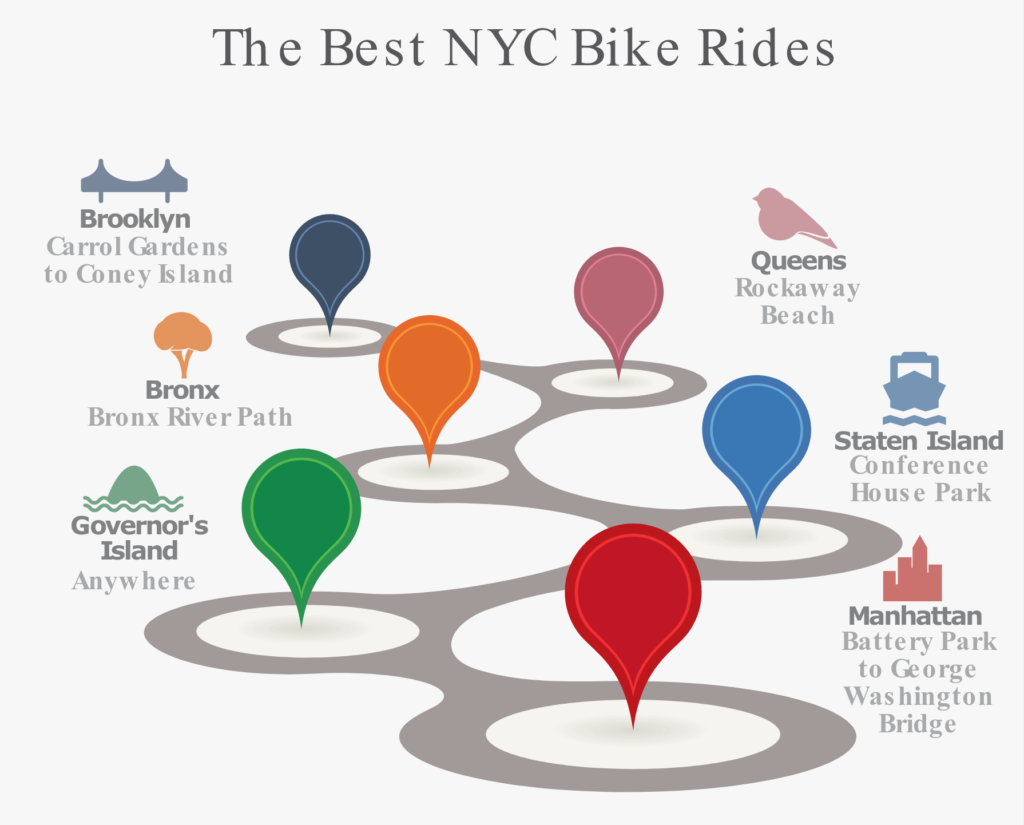 The city’s largest borough, Brooklyn offers a diversity of culture, food and scenery in its distinctive neighborhoods. A ride through Brooklyn’s bike trails will take you from Italy to Poland, Jamaica and back, so this is a good place to start on your bike tour of the city.

Start in Carroll Gardens and end at Coney Island for arguably one of the best bike routes in the five boroughs. Begin by sailing past the beautifully appointed brownstones just south of downtown, and make your way down Ocean Parkway with its wide tree-lined boulevards and pedestrian paths. There are dedicated bike lanes here, so there is no need to worry about mowing down pedestrians on your ride. That is, unless, they’re walking in the bike lane, which they are apt to do. This is where a good bell is useful.

You can make your way to Ocean Parkway and East 8th Street in the Kensington neighborhood, then follow the bike path the entire length of the borough until you end up at Coney Island. Enjoy a Nathan’s hot dog on the boardwalk before your trek home.

With its blend of both urban excitement and natural woodland, the Bronx is one of the best places for a bike ride. Hugging the Hudson River on the run up to Westchester County, the Bronx is a favorite of riders who like a bit of natural scenery during their rides. Wooded paths, quiet parks and fall foliage make the Bronx one of the best bike rides in the city.

The Bronx River Path starts in the northern part of the borough and takes you all the way up through Westchester into Yonkers. Lush scenery, ancient bridges and wooded paths are your companion as you hug the Bronx River Parkway on your trek north. Watch the scenery change from city to suburbia as you ride from the Bronx city limits past the leafy suburbs of Bronxville, Scarsdale and Mount Vernon.

This is one of the best places for biking in NYC as you get to enjoy the ride without worrying about dodging cars or dealing with the noise that typically accompanies city life.

Queens is a microcosm of the world, and its ethnic neighborhoods offer a more suburban feel than those in Brooklyn. Queens is the intersection between city and suburbia, and most of its border runs alongside that of Long Island, giving it a decidedly different feel than its counterparts in other boroughs. Queens is a more car-centric borough, so a bike ride here has to be somewhat strategic. There are, nonetheless, some beautiful bike paths for the cyclist who wants to enjoy biking in NYC.

Start in Rockaway beach and enjoy the sound of the waves lapping up against the shore during your ride. Explore the Jamaica Bay Wildlife Refuge for some peaceful bird watching over the water. If you want an easy shortcut, consider hopping on the A train and getting off at Howard Beach for a smooth ride across the bay at Cross Bay Boulevard. Finish up your ride at Beach 94th Street and stop in for a quick bite at one of the famous local eateries in the area.

Ah, Staten Island. Sitting off alone and accessible only by bridge or ferry, Staten Island is the most car-centric of all of the boroughs. Which also means that it is the least bike-friendly of all of the five boroughs. Never fear, the sprawling borough has many beautiful pathways and greenways which are perfect for exploring the island on two wheels.

Head down to the most southern tip of the island for a ride at Conference House Park, a bike route that takes you past some of the most historic buildings in the borough. One, the site of the Revolutionary War Peace Conference, dates back to the 1860s and is on the register of historic places. The meandering trails at Conference House Park take you past wooded glens, bridges and natural habitats for rare birds. Rumor has it that there are a few haunted houses along the trail, so keep this path in mind for your Halloween bike trips.

As an alternative, consider the Franklin D. Roosevelt Boardwalk bike path which connects South Beach to Midland and ends up in beautiful Fort Wadsworth park. This is a better path for beginners and family rides, so it’s worth a mention for your next bike ride. Riders will find that there are designated lanes for bikers and pedestrians, so you can easily ride without worry.

Manhattan, the heart and artery of the city. Known for its bright lights, excitement and as a magnet for dreamers from around the world. Grab a slice of pizza at an Italian pizza shop, or stop off and see a show on Broadway. While most people think of Central Park when they think of the best bike rides in Manhattan, your cycling adventures are by no means limited to the iconic park. While most parts of the city are decidedly not cyclist-friendly (hello yellow cabs!) there are some great trails that will allow you to enjoy the sights and sounds safely.

The West Side Highway is home to the Hudson River Greenway, which will take you on a direct bike route along the length of the borough from Battery Park City to the George Washington Bridge. Start off with a quick wave to the Statue of Liberty and make your way uptown, past the new World Trade Center, the Oculus and Brookfield Place.

Once you pass Chambers Street, take a gander at the athletes working on their golf swing on the roof of the Chelsea Piers sports complex and see the dinner cruise yachts as they pull away from the harbor. Catch a quick glimpse of The Shed at Hudson Yards at 34th Street and 11th avenue, to your right. With the Hudson River off to your left, stop and take a short break at the U.S.S. Intrepid Museum and check out a docked space shuttle. Finally, wave at the cruise ship passengers as they sail away, then make your way, uninterrupted up to the foot of the George Washington bridge.

Although not an official borough, no bike trail list would be complete without a mention of Governor’s Island. This car-free island is just a short ferry ride from lower Manhattan, and is a sprawling open space with plenty of open paths, trees and breathtaking views of NYC. This is a great place to take the kids for a summer picnic. No bike? No problem. You can rent them here by the hour. With nearly 5 miles of bike paths and trails, it is one of the most scenic and safest bike rides in New York City.

When it comes to enjoying the best bike trails in New York, each borough has its own flavor and interesting scenery for both beginner and advanced bikers. Biking in NYC is its own special thing—no less of a tourist attraction than the Brooklyn Bridge or the lights of Times Square. Find your path today.

1. How old the person needs to be to be able to rent a bicycle?
18 or older. If you are younger than 18, one of your parents or a legal guardian should sign the Release Liability form.

2. Is there any deposit required for renting a bicycle?
A passport, a valid U.S. ID or a credit card – are acceptable as a deposit.

3. Do I need to make a reservation?
To make sure that a bicycle and additional equipment is available for your desired date and time, we strongly recommend making an on-line reservation at least 48 hours in advance.

4. What do I have to bring with me?
A valid ID/passport/credit card, and a positive energy.

5. What should I wear?
We suggest you to wear something casual and comfy.

6. Do you provide your customers with a helmet, a chain lock, or a map of the park?
Yes we do.

7. Do you rent baby seats?
Yes, we do. They are available at an extra charge.

8. Do you offer discounts for larger groups?
Yes, we have special 30% discount for groups of 10 or more.

9. Do you include any tips in the price?
No. However, any gratuity is highly appreciated from our tour guides.

10. What should I do if my bicycle needs repair during the “renting time”?
You should return the bicycle to the store. We will change your bicycle for the new one and extend your “renting time” for an another hour.

11. I ordered rental/tour on-line but I’m running late. What should I do?
You should let us know about delay. We will do our best to accommodate you with bicycle/tour when you arrive.

13. What type of bikes do you rent?
We have 2014 Jamis Commuter bicycles- specially designed and constructed for long and enjoyable city rides. Our bikes are in different sizes from 14″ to 25″ frame to accommodate all our riders.