You are here: Home / Electric Bicycles 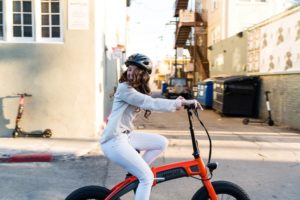 Until very recently, New York City had a ban on electric bikes, also known as e-bikes. The conflict dealt with lack of sidewalk space and that e-bikes should not be sharing the bike lanes with pedal bikes. Since e-bikes do not have to pedal in order to move unless riders choose to pedal instead of coast on electric power, it is possible for cyclists on pedal bikes to be bypassed by those on e-bikes (or vice versa if you have a really fast-pedaling cyclist). Ergo, the concerns the city had were with the number of possible accidents that could occur in bike lanes and on congested sidewalks (where bikes are not allowed in the first place unless the rider is a child).

In April of 2020, however, the City of New York changed this law. Governor Cuomo felt it was necessary to legalize pedal-assist motor bikes, e-bikes, and electric scooters as a means of increasing faster transport for necessary services during the pandemic. Almost all groceries and food delivery services have taken advantage of this change, since e-bikes can move faster and do not require any motor vehicle regulation to ride on the streets. Here’s more on the e-bike movement, how it may apply to any future visits you have in New York City, and electric bicycle rentals NYC.

Real electric bikes, the ones that operate fully on electrical power with no pedaling needed, are plugged into charging stations. Much like electric cars, their rechargeable batteries charge up, and then you are able to ride to just about any point in the city with little effort. The battery pack and charging port are located inside a box attached to the lower crossbar of each electric bicycle.

E-bikes have been very popular in many other major cities, encouraging “green travel” in place of taxis and other motor vehicle transportation for people that do not own a car and cannot afford other modes of public transportation. In those cities, you can rent an e-bike by punching in your personal info at a rental kiosk anywhere in the city and paying with a credit or debit card. Some cities do not require payment, but they still want your debit or credit info in case the bike goes missing and the city has to track it down.

At the moment, people are just getting used to the fact that e-bikes are now legal. The latest laws allow for these bikes to ride single file in any street bike lane in the city. They should never ride side by side because of the potential to slip and skid into a rider right next to them or into a car passing on the left. You can purchase your own E-Bike from Ecotric if you are interested in owning your own bike.

As for bike trails, the laws have changed in regards to the bike trails as well. Trails that are marked for both e-bike and pedaling bikes may use the same trails. If not clearly marked for e-bikes, chances are that you are not supposed to ride an e-bike on that trail. Two of the most popular and legal riding trails for e-bikes are the Oswego Trail and the Rivergate Trail, which are detailed below.

The Oswego County Trail is 27.6 miles long. It starts/ends on Maple Ave. in Fulton, NY, and then starts/ends on Cleveland, NY. You can get on and off the trail at several key points along the way if you decide that you do not want to e-bike the whole way, or you want to stop over in one of the other towns and cities along the trail. The trail itself is comprised of different materials at different points; ballast, crushed stone, and dirt.

The Rivergate Trail lies within Jefferson County, NY. It splits off and its endpoints are Rivergate to Redwood and Philadelphia to Clayton. Overall, the entire trail regardless of which direction you take is 30.2 miles of the most scenic New York state landscape. It is all dirt, grass, and/or gravel, which means that your e-bike will need the right tires to navigate this trail without spinning out and landing in the dirt.

Neither of these particular trails are in the city itself, so if you are looking for electric bicycle rentals NYC and bike paths within the city, stick to the bike paths on the roads. A map of these paths is provided by New York City’s bike maps website.

New paths may be added as the need arises or as traffic on e-bikes increases over time.

As previously mentioned, the laws legalizing e-bikes in the city only changed on the first of April of 2020. The e-bikes are regulated much like pedal bikes, with only a few minor exceptions. The future of electric bicycle rentals NYC is currently uncertain, but the hope is that once the economy starts up again and the city itself opens to tourists there will be rental stations all over the city where “x” number of e-bikes will be locked and parked until you swipe your card at the nearby kiosk.

In the meantime, you can familiarize yourself with the current e-bike laws. The city has already established what these laws are so that anyone who is using an e-bike in the city knows what they should and should not be doing. For example, anyone under the age of eighteen riding an e-bike has to wear a helmet, although adults should seriously consider following the same rule for personal safety. The rest of the current e-bike rules for New York City can be downloaded and found here.

Getting Around New York City by E-Bike

Looking at the provided bike paths map of the city, you can see that you will be able to get around the city quite a bit once electric bicycle rentals NYC are finally out in full force for tourists. Most of the boroughs have paths on the road or access roads for bikes. If and when you make it to New York City and they have electric bicycle rentals NYC, you can see a lot of the city on a rented e-bike. Get Your Own Ebike From Ecotric Today!

1. How old the person needs to be to be able to rent a bicycle?
18 or older. If you are younger than 18, one of your parents or a legal guardian should sign the Release Liability form.

2. Is there any deposit required for renting a bicycle?
A passport, a valid U.S. ID or a credit card – are acceptable as a deposit.

3. Do I need to make a reservation?
To make sure that a bicycle and additional equipment is available for your desired date and time, we strongly recommend making an on-line reservation at least 48 hours in advance.

4. What do I have to bring with me?
A valid ID/passport/credit card, and a positive energy.

5. What should I wear?
We suggest you to wear something casual and comfy.

6. Do you provide your customers with a helmet, a chain lock, or a map of the park?
Yes we do.

7. Do you rent baby seats?
Yes, we do. They are available at an extra charge.

8. Do you offer discounts for larger groups?
Yes, we have special 30% discount for groups of 10 or more.

9. Do you include any tips in the price?
No. However, any gratuity is highly appreciated from our tour guides.

10. What should I do if my bicycle needs repair during the “renting time”?
You should return the bicycle to the store. We will change your bicycle for the new one and extend your “renting time” for an another hour.

11. I ordered rental/tour on-line but I’m running late. What should I do?
You should let us know about delay. We will do our best to accommodate you with bicycle/tour when you arrive.

13. What type of bikes do you rent?
We have 2014 Jamis Commuter bicycles- specially designed and constructed for long and enjoyable city rides. Our bikes are in different sizes from 14″ to 25″ frame to accommodate all our riders.